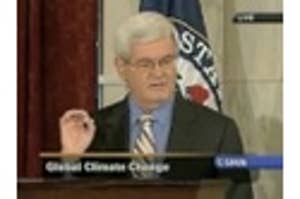 Newt Gingrich campaigning in Golden, Colorado today said we "don't know," if climate change is occurring." Gingrich cites his work as "amateur paleontologist," and says he "always opposed cap and-trade." But in a 2007 forum with John Kerry on climate change Gingrich said "the evidence is sufficient to move towards the most effective possible steps to remove carbon loading in the atmosphere." 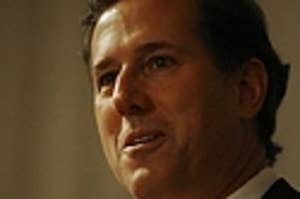 A glimmer of hope dashed? The candidate is still 49 signatures short, the state says. 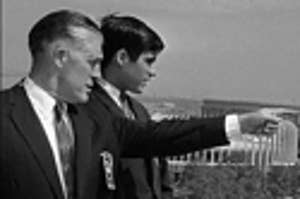 Nelson Rockefeller's name has become synonymous with moderate Republican positions. When George Romney ran for President in 1968, he borrowed much of his staff from Rockefeller's '64 run. Here are three great archival clips showing their relationship. 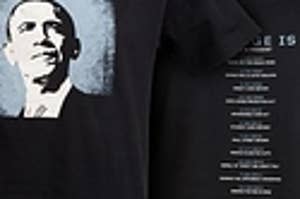 Shirt cites a bevy of legislative accomplishments and the end of the Iraq war. Where is Osama? 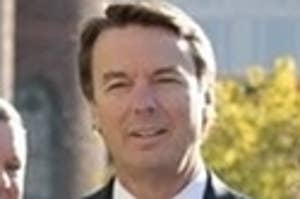 There's Already A Way To Raise And Spend Money In Secret 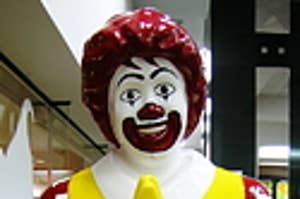 But seriously, this lady totally had it coming to her. 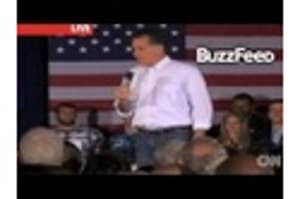 Recently BuzzFeed reported that Mitt Romney made a part of his stump a fake quote attributed to Thomas Paine. After Romney continued to repeat the quote following BuzzFeed's report, BuzzFeed wrote Romney a memo to further reiterated the point. It appears Romney got the memo. 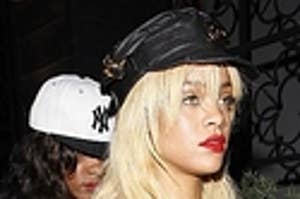 Rihanna Wears A Transparent Swimsuit As A Shirt And Other Links

Also, her thumb nail is creeping me out since it looks like it's about to fall off. Science goes to the dark side of the moon and Brad Pitt gloats about banging Angie. These and other buzz that slipped past our radar today await your clicking pleasure. 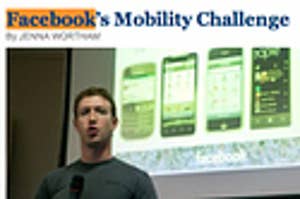 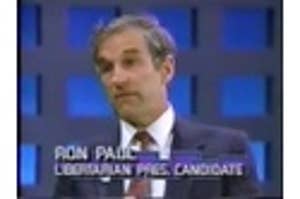 Ron Paul has never been considered a conventional politician, but his 1988 appearance on the Morton Downey Jr. Show is bizarre even by his standards. Paul took, on among others, Guardian Angel Lisa Sliwa in 15 minute showdown that featured Paul defending the traditional Libertarian policy he still defends today.

In honor of the Super Bowl, I guess? Nothing has ever been more GIF-able.

"One would think that a church would feel a special obligation to make sure that they weren't fueling a black market for a particularly deadly form of commerce," a source involved in the report says.

Barack Obama's 2008 logo was the toast of the design world, but Mitt Romney's doesn't feel quite as fresh -- despite its striking resemblance to the logo for Aquafresh toothpaste. Actually, it looks like pretty much every other corporate logo in America: Aquafresh, Pepsi, Ramada Hotels, and Carnival Cruise, among others. The Romney font is set to Trajan, which is the same font used for Lord of the Rings, Minority Report, Titanic, The Mummy and Star Wars Episode II.

Ron Paul Has Never Worn A Flag Pin In A Debate

It would be kind of more surprising if he had.

Hey y'all, I found Winter. While the U.S. continues to bask in the warmth of an unusually mild winter, Mother Nature has claimed almost 300 lives from Switzerland to Rome as temperatures plumet up to -22 Fahrenheit across Europe.

For you consideration... This is not a joke. Michael Bay takes the Oscars super serious you guys.

When Republican Candidates Were Not So Hot On Reagan

Today would have been Ronald Reagan's 101st birthday, and so the Reagan-worship may hit an all-time peak. But the current candidates have had their moments of breaking with the Reagan orthodoxy, and here their greatest hits on Reagan throughout the years.

Attention Rep. John Fleming! This is satire too.

Former Gov. John Sununu, Mitt Romney’s Top MSNBC surrogate — and really, the best surrogate around — batted back at claims by Democrats that low primary turnout is a sign of an unenthused Republican electorate.

Congressman Sources An Onion Article As Fact On Facebook

Oops. Representative Jon Fleming of Louisiana found out the Onion is an excellent source for satire the hard way.

"This is it Gina!" What happens when your team wins the Super Bowl and you win thousands of dollars in a pool? This guy. His wife warns him not to call out the IRS, but he doesn't care.

Vermin Supreme came out in favor of pre-emptive action against Iran in last week's debate with "Rent Is Too Damn High" candidate Jimmy McMillan.

From center to centrifuge? A story breaks once, twice, three times. And now, everybody misses things — except, perhaps, @zekejmiller.

She looks like she should snap in half. With a Victorian eye for beauty and a dedication to corset training, you too could look like Ioana Spangenberg.

Romney won big in Nevada, but it's not a huge story. Missouri, Minnesota, and others start to tune in.

His campaign has stayed relevant in part by convincing the press that he would dominate a series of caucuses with organization and energy. In Nevada, he did better than in 2008 -- but not well enough.