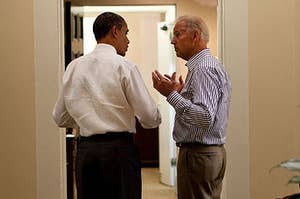 21 More Photos That Show What Joe Biden Is Really Like

These totally real, and absolutely not at all made up quotes* from Joe Biden show how cool a guy our VP is. But yeah, totally real. Absolutely legitimately real… 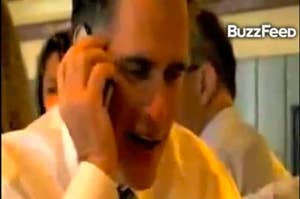 Mitt Romney Gets Pranked By An Ahhnold Soundboard

A joke played by Romney's son Matt in 2008. The Michigan primary was seen as a do-or-die for Romney. Naturally, Matt just wanted to help him relieve some stress. 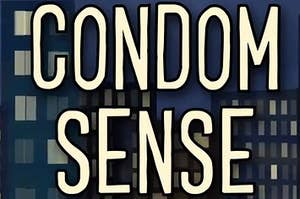 Seriously kids, wrap it up. It's all fun and games until someone gets syphilis. 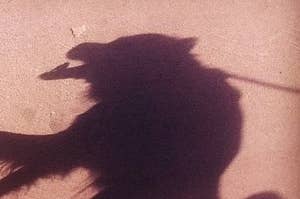 This Dog Has A Secret Identity

The jig is up, pooch! I hope his owners have a lot of silver. 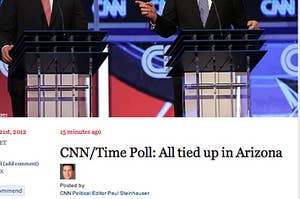 CNN And Time Treat Their Shared Poll A Bit Differently 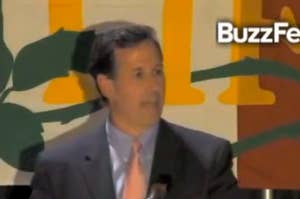 Rick Santorum has deflected recent criticism of comparing Obama to Hitler via the use of a metaphor comparing stopping the President to World War II by telling CBS "the World War II metaphor is one I've used 100 times in my career." Indeed, a 2010 speech at the Louisville Right to Life banquet unearthed by BuzzFeed shows that the former Senator has used the comparison before. 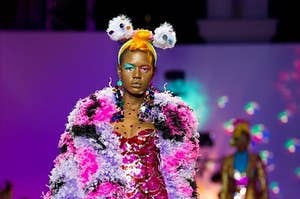 Now this is the whacked out high fashion we've all come to expect. It's like Dr. Seuss and Raggedy Ann took LSD and made a baby. 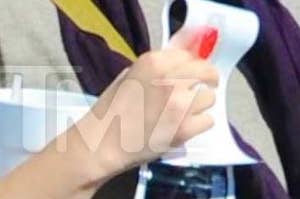 Photographic Evidence Drew Barrymore Is Pregnant And Other Links

Psssst, Drew, you gotta put that stuff in your purse if you don't want the paparazzi to see it. Plus, Worf don't get no respect and gas prices are set to hit five dollars a gallon. These and other Buzz we missed await your clicking pleasure. 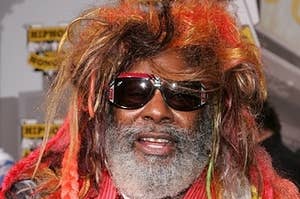 The funk legend has turned to Internet fundraising site, IndieGoGo to save his studio and help him in his fight to regain the rights to his classic songs. 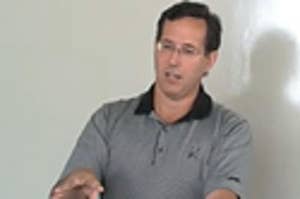 Rick Santorum In 2008: There's No Such Thing As A Liberal Christian

Rick Santorum, when discussing Obama, said the problem is with the very idea of liberal Christianity. 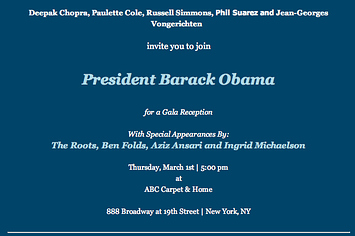 The comic joins The Roots, Ben Folds, and Ingrid Michaelson for an fundraiser at ABC Carpet in Manhattan, according to this invitation provided by an Obama backer. On March 1, $35,800 will get you a handshake with the president. 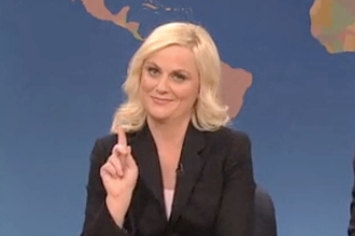 MSNBC, Saturday Night Live, and local news outlets were happy to spell out the explicit details surrounding Virginia Republicans' quite literally invasive anti-abortion bill for their viewers. Will the CNN, Fox News and the major networks follow suit after yesterday's effective silent protest in Richmond? 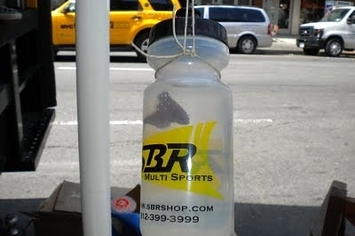 "our fearless sidekick. this fish has cheated death more times than i can remember," Craig Romney wrote on his 2009 road trip blog. Andrew Sullivan has many questions: "Did it eventually travel inside the truck? Did they strap it to the roof and have it constantly sprayed with water? Did they just suspend it from the bumper, Clark Griswold style, because it enjoyed the view?" 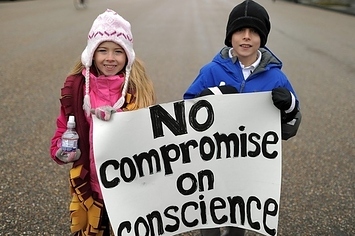 For Catholic School Suing Government Over Contraception Mandate, There Is No Compromise

President of Ave Maria University says that even the administration's recent olive branch to religious organizations isn't enough. Opposes covering any and all forms of birth control. 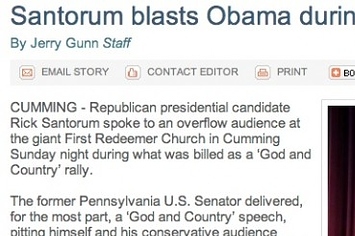 The Most Unfortunate "Santorum" Santorum Headline Yet

It's almost too easy at this point. 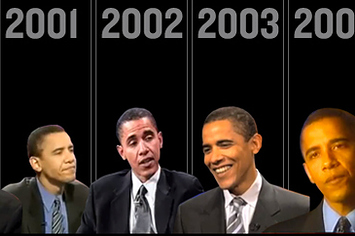 To most Americans, Barack Obama seemed to appear out of nowhere, fully-formed, in 2008. This rarely-seen footage from 1991-2004 captures lesser-known moments in the future president's life -- as law student, community organizer, local politician, failed Congressional candidate, and Democratic nominee for Senate -- and offers a glimpse into his political and personal roots. 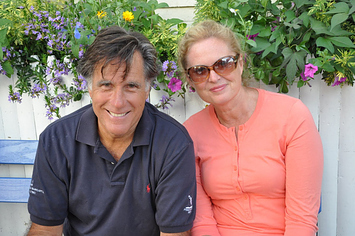 Turns out the Republican frontrunner isn't always so buttoned-down. The candidate's daughter-in-law has maintained a mommy blog for years, and it's a treasure trove of candid Romney shots. Allow me to introduce you to Casual Mitt. 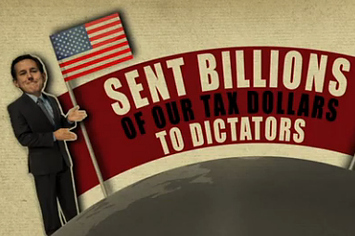 He's spending $50,000 to air this blast on Michigan cable, a Republican source says. The libertarian can't win, but he can help Mitt Romney. 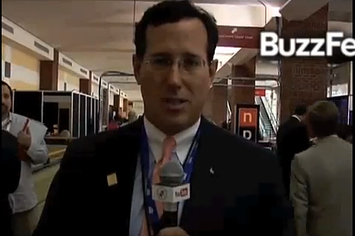 Rick Santorum often deflects criticism of the 2008 primary endorsement he gave to Mitt Romney by saying he was for anyone-but-McCain. But in the 2008 after McCain had clinched the nomination Santorum seemed to hold no ill will toward the Arizona Senator. Santorum actively campaigned for McCain, touting him as a "reformer," and someone who would "shake up Washington." 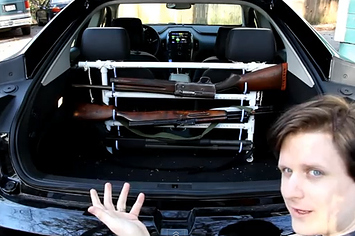 Sorry Newt: You Can Put A Gun Rack In A Chevy Volt

This guy proves Newt Gingrich's jabs at electric cars wrong. Probably wouldn't have hit his head on a pickup though.

Democrats are attacking the former Massachusetts Governor for the amount of federal subsidies the 2002 Salt Lake Olympics received. In a February 2000 speech to the National Press Club, Romney said the Olympics were worth the "massive investment for which they cost." The "hundreds of billions dollars" spent on the Games, Romney said, was necessary to "demonstrate peace to the world." 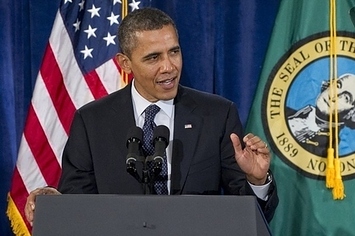 The Becket Fund for Religious LIberty has filed suit on behalf of Ave Maria University against the Obama Administration's requirement that employers cover birth control. The fight over contraception is now moving into the courts. 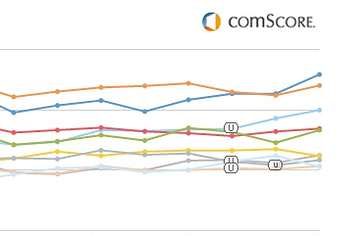 The mid-market British tabloid is the Internet's biggest newspaper. The gap grew to 3.7 million uniques in January; Clarke hopes it will stop the Gray Lady's "whining." 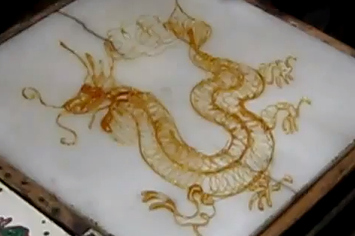 Move along, nothing to see here. Unless you like awesome street art and candy and dragons, in which case you should definitely watch this. 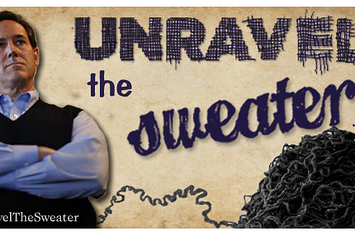 Santorum's sweater vest is the easiest point of entry for his detractors, as well as his supporters. 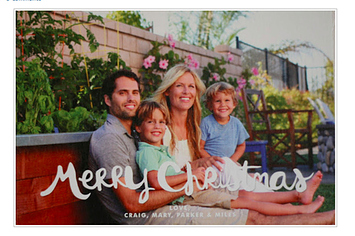 The whole Romney family are social media naturals — so why can't they connect? Is it all one big Mormon mommy blog? 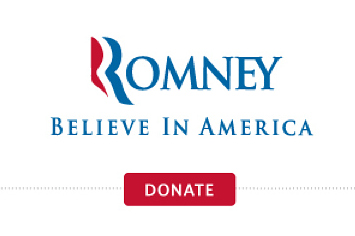 Romney Road Trip Fundraiser: "You Won't Have To Pull Over To Use The Restroom"

Notoriously, the candidate didn't stop to let his kids go to the bathroom. But will there be a dog on the roof?

Because they "promote homosexual lifestyles." 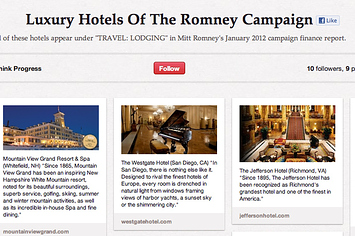 Progressive group ThinkProgress goes after Romney on the hot online pinboard. But are they making fun of Romney, or of Pinterest?