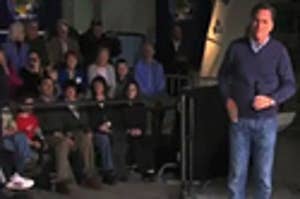 At a town hall style meeting in Portland, Maine today a woman confronted Mitt Romney over his foreign investments in the Cayman Islands. Romney responded to the woman by explaining his investments are handled by a blind trustee, and that he pays all the taxes required of him. 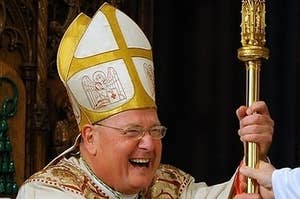 The Five Key Players In The Contraception Fight

A political season that was supposed to be about the economy has instead turned into a food fight about contraception and religious liberty. Here are the combatants who will decide where this ends up, and how women who work for Catholic institutions will get contraception. 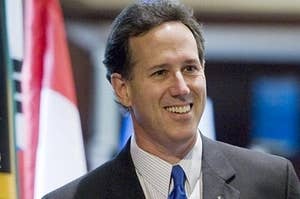 Did Rick Santorum Have Dinner With A White Nationalist?

A group called ProEnglish tweeted that its director, who used to be involved with white nationalism, had dinner with Rick. 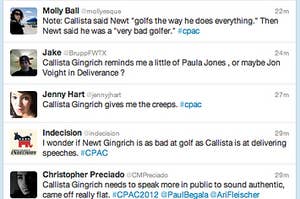 Newt's would-be first lady introduced him at CPAC--and the reviews were brutal. 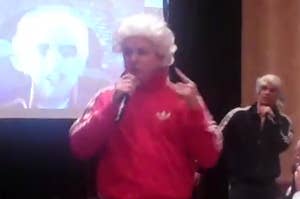 The Most Exciting Thing At CPAC Today

Two guys in colonial wigs and track suits doing a patriotic rap called "Mr. America." That's Fox News contributor Steve Crowder and Chris Loesch, aka Mr. Dana Loesch, getting hands waving in a half-full convention room at the Conservative Political Action Conference. Keep an eye out for the woman shaking her fanny pack at 1:17 and the black guy who walks out at 1:54. 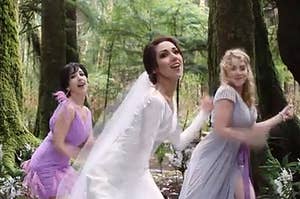 As in the real deal, Jacob will make you give him the side-eye. The Hillywood Show nails it. 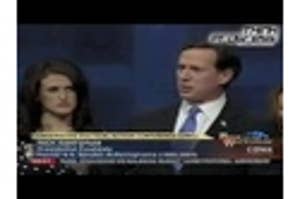 In the still unlikely event he's the nominee, he's going to be hit hard on this one: He's not just opposed to contraception in his private life, or to forcing it on religious institutions, but to insurance paying for it at all. He probably thinks businesses can make their own decisions on the point — but he's may have a tough time explaining that to women in October. 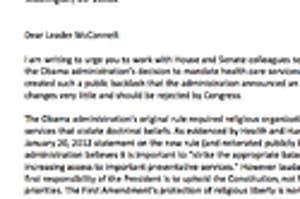 A letter from conservative ex-Rep. David McIntosh to Senate Majority Leader Mitch McConnell proposes a plan for stopping it. 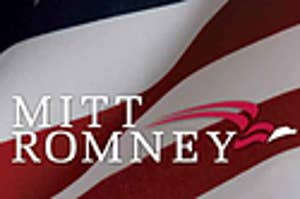 The 2012 Republican primary is all about fixing the economy and repealing ObamaCare. This document, however, Mitt Romney's official 2008 nearly 70 page long campaign book, is clearly put together in the shadow of 9/11. The pamphlet contains topics such as "Confronting Radical Jihad,"and "Latin American Allies," a long way from today's inward-looking debate. 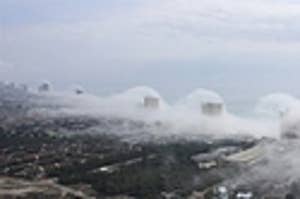 Whoa. Helicopter pilot Mike Schaeffer took these pictures of fog moving in from the Panama City Beach coast on Sunday. Apparently a gentle breeze can cause this to happen.

Coco Poses Naked With Baby Nephew And Other Links

Familial bond or really creepy? (SFW-ish) Plus, Lindsay Lohan's dad is looking for a job and Madonna is old and cranky and doesn't get kids these days. These and other Buzz we missed today await your clicking pleasure.

Fred Karger, openly gay minor presidential candidate, has filed a discrimination complaint against the American Conservative Union for not allowing him a booth at their annual conference. His complaint is likely to go into mediation, the last step before litigation.

Mitt Romney often defends the individual mandate that was the cornerstone of his Massachusetts health care reform law by saying it was put in place on a state level. But the health care reform plan he campaigned on in 2008 was also largely centered around the concept. Although the plan implies using a "federalist approach," the plan doesn't specifically imply it that it is a states-only approach. Implementing the concepts laid out in the Romney plan, including the "Stop The Free Riders," concept would most likely have to involve some coordination on the federal level.

The shaken frontrunner isn't thinking about the general election anymore. He's "severely conservative," and he's not afraid to say it!

In 2006 Rick Santorum was in a tough, and ultimately failed Pennsylvania reelection battle with then State Treasurer Bob Casey. Santorum released a series of ads and pamphlets to tout his moderate record. Here is one of those ads which features Santorum boasting about fighting the Bush Administration on cutting Amtrak funding and helping to raise the minimum wage.

It's not what you think.

Presenting: The Cutest DJ In The World

How You Know It's Definitely The NFL Offseason

"What's wrong with the nutjobs?" For Mitt's allies, it's just not fair.

Avid Instagram users, meet Lovestagram. It's a super-cute app that allows you to send e-Valentines to your beloved through Instagram -- but even cuter, perhaps, is the story behind the app's creation. We were so inspired by the idea, actually, that we created a few examples of our own featuring some BuzzFeed favorites.

Will Ferrell proved himself the best person at announcing starting line-ups during Wednesday's Bulls - Hornets game. Thus, it's only appropriate that the NBA tap Ferrell to make the introductions later this month at the All-Star game. Help us get the league behind this obviously great idea.

Crowds pack the halls to see Santorum speak at CPAC, and he zones in on Romney and Obama. At least for this weekend among fellow social conservatives, he's a contender.

So does Planned Parenthood. Is the center holding?

God And Man On The White House Flickr Feed

It's tough to keep church and state entirely separated.

The White House works to hold the center.

The Answer To The Tea Party Question: They'll Fall In Line Behind Romney

The dithering over whether Tea Party supporters will vote Romney doesn't hold up. When faced with Romney vs. Obama, activists say they only have one choice.

Some of these will surprise you.

Democrats Boxer, Shaheen, Stabenow don't like Scarborough's take on contraception. But nobody went on this morning.