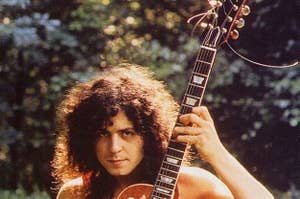 Were he still walking among us, today would've been the 69th birthday of Marc Bolan, the singer/songwriter best known as frontman and guitarist for the band T. Rex. Alas, Bolan was killed in a car wreck on September 16, 1977 when he was only 29 years old, which places him among the ranks of all too many musicians whose early deaths have left their fans wondering about what music we might have heard if things had gone another way. If there's any solace to be had in Bolan's premature demise, it's that he left behind a remarkably sizable discography for someone who hadn't even hit 30 yet, which - given that his fanbase is still massive over four decades later - has resulted in more than a few individuals paying tribute to Bolan by performing covers of his songs. While most everyone who came of age in the '80s knows The Power Station's take on "Get It On (Bang a Gong)," here are 10 additional T. Rex covers that may have flown under your radar. 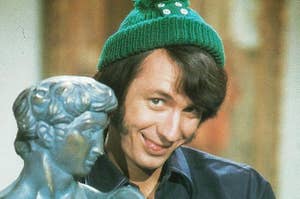 It's April Fool's Day, which means that it's best to be on guard for possible pranks that might be pulled at your expense, but it's not as if the pulling of practical jokes is something that's limited to a single day of the year. Here are five instances where notable musicians entertained themselves and had some fun, some of which were on April 1, some of which weren't, but they're all pretty funny...at least to the people who weren't the victims, anyway.

Femmes Facts: 9 Things You May Not Have Known About The Violent Femmes

The Violent Femmes have been making music for 35 years (give or take the occasional brief hiatus), playing shows whenever the mood strikes them, but they hadn't released an album in a decade and a half. That situation has finally changed, thanks to We Can Do Anything, the band's first album since 2000's Freak Magnet, and since their latest endeavor is actually their ninth studio album, we decided this would be a good time to take a look back at nine things you may not have known about the Femmes. 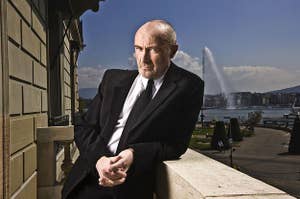 Phil In: 12 Times When Phil Collins Popped In To Play On Other People's Records

Everyone knows that Phil Collins was a member of Genesis, and given that he released Face Value 35 years ago this month and has since gone on to sell an estimated 150 million albums worldwide, it's a fair bet that plenty of people are well aware of his solo career, too. What you may not realize, however, is just how many other songs he's played on over the years. Given the ongoing reissue campaign for Collins' solo catalog, this seems like the perfect time to fill you in. 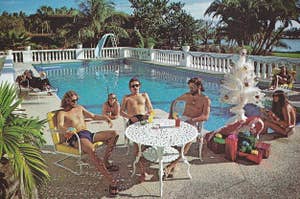 Have you ever been listening to Christmas music and found yourself wondering, "Say, how did this song come about in the first place?" You haven't? Well, tough, because we have. In fact, we've done it enough times that we decided to put together a piece exploring the origins of some of our favorite Yuletide faves. 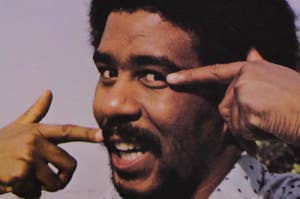 Today would've been Richard Pryor's 75th birthday, and in celebration of that momentous occasion, Rhino Records added a half-dozen of Pryor's classic albums to their digital catalog. In turn, we're taking a look back at the history of each effort. 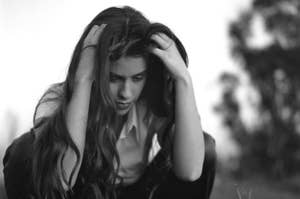 It takes one heck of a successful album to deliver a six pack's worth of hit singles, but that's exactly what Alanis Morissette's Jagged Little Pill managed to do, earning a half-dozen Hot 100 hits: "You Oughta Know" (#6), "Hand In My Pocket" (#13), "Ironic" (#4), "You Learn" (#6), "Head Over Feet" (#8), and "All I Really Want" (#58). In celebration the album's 20th anniversary—an occasion which has resulted in the release of a new multi-disc reissue of Jagged Little Pill—here are six things you may not have known about these singles. 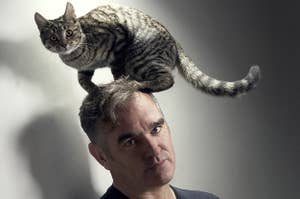 Cool For Cats: 20 Musicians Chilling With Their Feline Friends

Happy National Cat Day! Yes, for real. And, yes, we know that not everyone is a cat person - take dog people, for instance - but for whatever reason, it seems that musicians in particular have a recurring tendency to prefer their companions to be of the feline persuasion. We've collected 20 examples to show you that we're not making this up, and as a bonus, we've dug up a number of cat-centric tracks and compiled them for your listening enjoyment. We don't want to suggest that it's the purr-fect playlist - when it comes to music, we know some of you are pretty persnic-kitty - but hopefully you'll find something in the mix to enjoy. 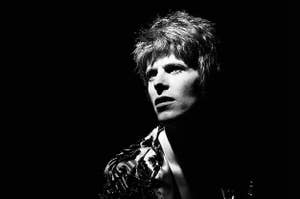 9 To 5: Nine Things That Happened During David Bowie's 'Five Years'

The early career of David Bowie was recently celebrated with Five Years 1969-1973, a 10-album/12-CD box set which includes all of the material released by Bowie during the course of that half-decade, along with a pair of live albums which were recorded during the time frame in question. In turn, we're taking a look back at those thrilling days of yesteryear in hopes of providing you with a few tidbits of trivia about the Thin White Duke that may have escaped your knowledge up to this point. 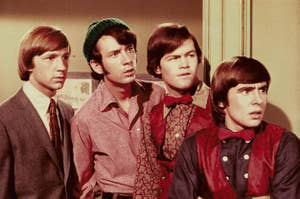 50 years ago this month, producers Bob Rafelson and Bert Schneider placed a classified ad in The Hollywood Reporter seeking "4 insane boys," a move which - just over a year later, on September 12, 1966 - led to The Monkees making its debut on NBC. To celebrate the 50th anniversary of that ad, Rhino issued the announcement that they'll be releasing the series on Blu-ray on January 29, 2016. (You can pre-order it here.) As an additional method of celebration, we've compiled 10 things you may not have known about the first 10 small-screen adventures of Davy, Peter, Micky, and Mike. 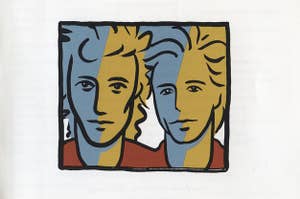 Just 13 Things You May Not Have Known About The Rembrandts, Baby

25 years ago this month, Danny Wilde and Phil Solem - otherwise known as The Rembrandts - issued their self-titled debut, an effort which provided them with their first hit single, "Just the Way It Is, Baby." In celebration of this anniversary, we checked in with the aforementioned Mr. Solem, had a nice chat, and came up with 13 things which we suspect most of you may not have known about The Rembrandts or their debut album. 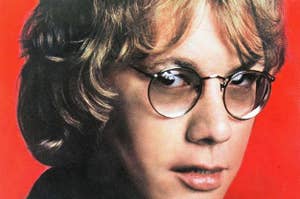 Draw Blood: 13 Things You May Not Have Known About Warren Zevon's "Werewolves Of London"

This month marks 34 years since the film An American Werewolf in London opened in theaters, giving moviegoers the opportunity to laugh and scream at the same time. For music fans, though, when the topic of werewolves and London come up, the point of reference isn't David Naughton howling at the moon, it's Warren Zevon howling about a furry fellow who's walking through the streets of Soho in the rain with a Chinese menu in his hand, which is why we've pulled together a few facts about Mr. Zevon's song, many of which might surprise you. If you don't know any more about werewolves than what you've learned from Tyler Posey, then it's time to turn off Teen Wolf and get schooled on a rock 'n' roll classic. 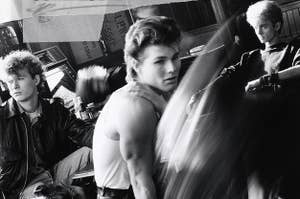 A-Ha! 30 Things You May Not Know About The Band Behind "Take On Me"

In America, when you hear the name "a-ha," either you think someone's experienced a revelation or you find yourself humming "Take on Me," but the career of the trio behind that classic track is far more substantial than just the one single. On the 30th anniversary of the release of the band's debut album, Hunting High and Low, here's your chance to learn about the history of a-ha from the very beginning all the way up to where things stand with the band in 2015. 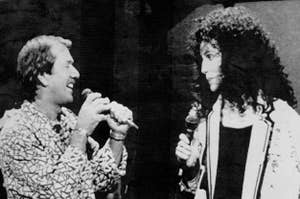 33 Performances That Clarify Why Music Fans Will Miss David Letterman

There are plenty of reasons that comedy fans will be entering a period of mourning after David Letterman steps down as the host of "The Late Show with David Letterman," ending a 33-year run in late-night, but it's going to be rough going for music fans, too, given how many artists were given the spotlight by Dave over the years. Appropriately, we've put together a list of 33 performances that have thrilled us over the course of that run. No, they're not necessarily all the very best that Mr. Letterman had to offer, because this thing would enter into triple digits if we went that route, but they'll give you an idea of the variety that Dave served up as well as the vacuum that'll be left by losing a host who actually cared more about spotlighting the music he loved than the number of viewers who might've tuned in to hear it. 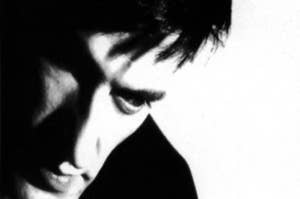 Today marks the 30th anniversary of the release of New Order's third studio album, Low-Life, an effort which effectively completed their musical evolution from the early post-punk sound that Bernard Sumner, Stephen Morris, and Peter Hook initially carried over from their days in Joy Division into a full-fledged dance-rock band. To celebrate this illustrious occasion, here are a few things you may not have known about the album...unless you're an überfan, in which you'll roll your eyes and say, "Well, duh." (We don't really need to dance around that possibility, do we?) 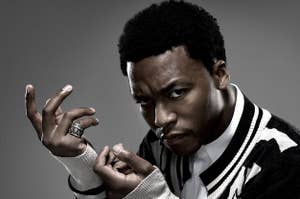 If you've caught Panic! at the Disco's new single, "Hallelujah," then you've heard the way the Vegas-formed band has utilized a sample of Chicago's "Questions 67 & 68" to great effect...and if you haven't caught the single yet, we've embedded the video below, so there's that problem solved! In celebration of this use of a classic song to create a new classic, here are four other occasions when a similar sonic situation has occurred. 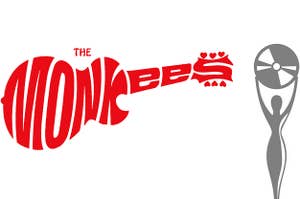 Every induction ceremony just reminds us that The Monkees deserved to be in the Rock & Roll Hall Of Fame from day one. Some folks have argued against it. Their arguments don't hold up. Even against many of the legends already inducted. 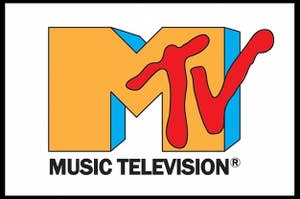 MTV: When It Began

When MTV first arrived on the airwaves on August 1, 1981, the network certainly didn't invent the music video, but it definitely went on popularize and legitimize the video as an additional method of artistic expression for musicians and - perhaps more importantly - an incredibly successful way to sell a song to the masses. That process, however, wasn't an instantaneous one, which meant that when it came time to program the day's video playlist, the pickings were a little slim. 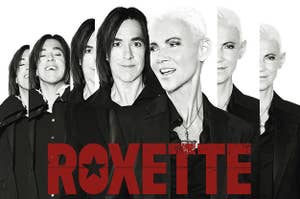 9 Times Roxette Were The Soundtrack To Your Life

Believe it or not, it's been 25 years since Pretty Woman premiered, and Roxette's 'It Must Have Been Love' provided the soundtrack to the montage which made us all fall in love with Julia Roberts. Roxette's amazing songs pop up in soundtracks all the time, but how many of these do you remember? 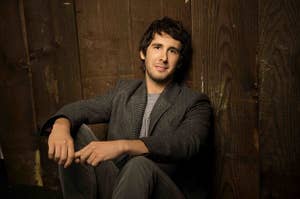 Today is the 34th birthday of Josh Groban, a guy who’s sold more than 25 million albums worldwide. As such, you’re probably pretty sick of listening to his music, right? No, of course you’re not, which is why we’ve compiled a playlist of 20 songs from his back catalog as a tribute to the birthday boy. You'll find it at the bottom of this piece, so give it a spin, won’t you? But before you get to listening to those top-notch tunes, we also wanted to pay tribute to a side of Groban’s career that doesn’t get nearly as much attention: his work as a comedian. No, he’s not a stand-up comedian – although his between-song banter at his concerts does often have the audience in stitches – but Josh Groban is a pretty funny guy, and since we suspect that a lot of you may not have known this about him, here are 14 clips which spotlight his comedy chops.