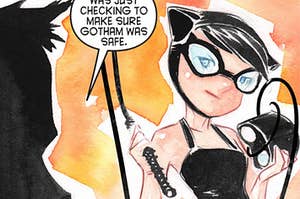 Batman And Catwoman Take A Vacation From "Li'l Gotham"

Even the Dark Knight needs to unwind. Whether he likes it or not. 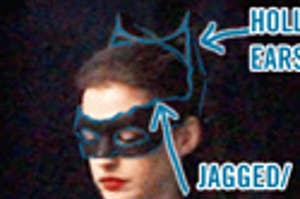 While the Bat's away, the Cat will play. I have enough faith in Nolan believe this subversion of Catwoman's ears is true. Warning: Theoretical spoilers ahead! 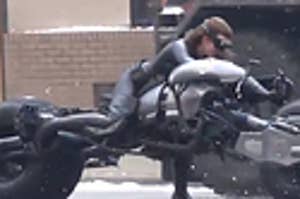 Footage Of Catwoman Riding The Batpod

This weekend, Catwoman (presumably Anne Hathaway's stunt double) was caught hauling her kitty hindquarters around Pittsburgh with some Tumblers. It's unclear whether the civilian footage captured actual reel in the making from "The Dark Knight Rises" or, more likely, if Selina Kyle was test-driving the Batpod to avoid another crash into an IMAX cam. 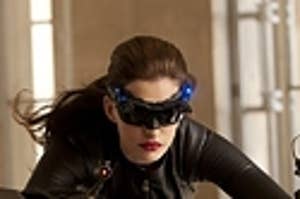 Nevermind the fake full-body pic of Anne Hathaway's Catwoman that spun around the Web yesterday. Some legit news related to "The Dark Knight Rises" villain has come to light. According to sources, Selina Kyle's roundly criticized costume seen here is not complete (phew!), and "she has a history of abuse and works as a stripper and is also a pickpocket." (via.)