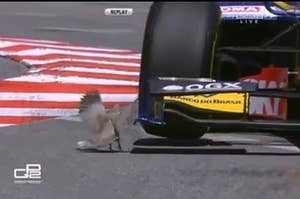 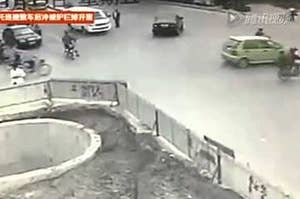 A man in China somehow manages to ram his scooter into several vehicles without anyone stopping him or his machine shutting down — and that's only the beginning. (Watch the top-middle of the screen from the start of the video to spot our hero.) 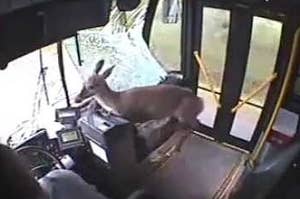 A CamTran bus surveillance camera caught a deer crashing through the windshield in Johnstown, Pennsylvania, Tuesday night. The bus driver immediately stopped and allowed the confused deer to exit through the front doors. 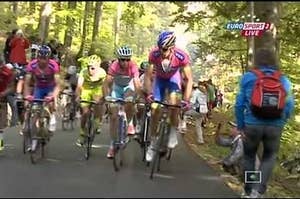 A fan watching today's 10th stage of the Giro D'Italia took a wrong step and ended up falling down the hill as the cyclists cruised past him. Hope he was OK -- that was quite a drop. 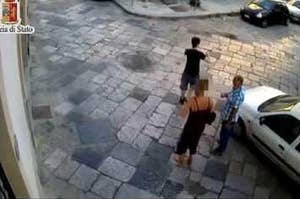 CCTV captured a female French tourist fighting off two knife-wielding robbers in Palermo, Italy. The woman forced them to flee without her handbag, but had her video camera stolen. The incident took place last year and this week the Italian police arrested the thieving couple. 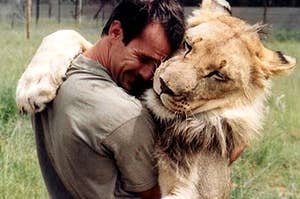 This Is Shocking! The Most Amazing Thing You'll Ever Watch!

Of all the big cats, the lion is one of the most terrifying -- but there's one man who isn't scared at all. He's Kevin Richardson, and he's dedicated his career to understanding, conserving and living alongside these majestic beasts. Join Kevin in My Lion Family as he shows you the mighty lion in a fascinating new light. 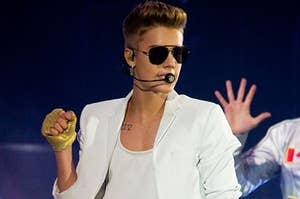 Justin Bieber attacked by male fan who stormed onstage and grabbed him during Dubai concert. 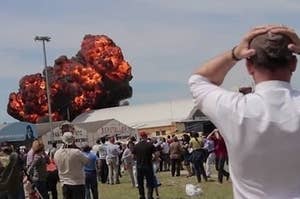 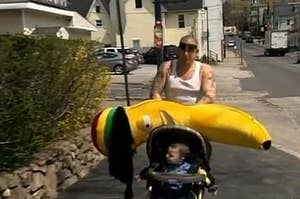 'I happened to become that sucker': N.H. man says he lost life savings playing 'rigged' carnival game Henry Gribbohm, 30, ended up sinking $2,600 on the 'Tubs of Fun' game, he said. With nothing to show for it, he returned the next day to complain, and ended up getting a stuffed banana and some of his money back as a consolation prize. A New Hampshire man was so bonkers for a carnival prize that he tried desperately to win an Xbox — and ended up spending his entire life savings in a fruitless pursuit. After landing $2,600 in the hole, 30-year-old Henry Gribbohm says he didn't win the gaming console, but later took home an oversized plush banana wearing a hat and dreadlocks. It was an unappealing consolation prize. "For once in my life I happened to become that sucker," Gribbohm told CBS affiliate WBZ-TV as he toted the banana around on his son's stroller. "I was foolish for putting up my life savings." Gribbohm's tale of woe began Saturday, when he attended a carnival in Manchester and decided to try his luck at a game called "Tubs of Fun." Players pay $5 for a chance to toss two softballs into a large tub tilted at an angle. If the ball stays inside, the player wins. Gribbohm wasn't successful, but two workers goaded him to keep trying. "They said they would double my money if I could get 10 balls in the bucket," Gribbohm told The New Hampshire Union Leader. "I was loud and into it, and they said I was helping to draw a crowd over to the booth. They said I would win my kids an Xbox Kinect, which are like $400 I think. So I gave it a try." Initially, his tab rose to $300. But he was so consumed with winning, he said, he went home and took out another $2,300. He gave up when all of his money ran out. The next day, he returned to complain to management. He was able to get $600 back — and the oversized Rastafarian-themed banana. Gribbohm suggests the game wasn't just rotten, it was rigged — and he filed a complaint with Manchester police. A spokeswoman said they were reviewing the claim. Fiesta Shows, which operates the carnival, didn't immediately return a call seeking comment Tuesday. A Fiesta official, John Flynn, previously told WBZ-TV that the game was run by an independent contractor, and there were no previous complaints about it. Flynn said it was "pretty next to impossible" to burn through as much cash as Gribbohm supposedly did playing "Tubs of Fun." The game, however, isn't exactly fair either, according to Bill Howard's book, "Carnival Fraud 101." Howard explains the setup: From inside the booth, a carnival worker easily tosses a ball into one of the tubs as an example. Then he asks a participant to throw the second ball for practice. With the first ball already inside the tub — acting as a sort of anchor — the second ball doesn't bounce out, Howard writes. But when it comes time for the player to give it a legitimate try, the carnie clears the tub of all of the balls — and the task becomes near impossible without that anchor ball. "You might as well throw your second ball across the midway because no way it will stay inside the tub either," Howard writes. 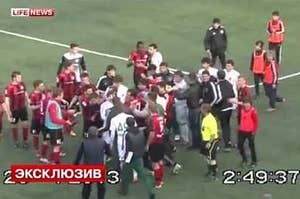 Russian linesman Musa Kadyrov was banned for life after punching and kicking a player during a match between Amkar Perm and Terek Grozny on Sunday. Kadyrov launched his vicious attack on 18-year-old Amkar left-back Ilya Krichmar after the referee blew the final whistle. Kadyrov said Krichmar had insulted him but the player denied the allegation. 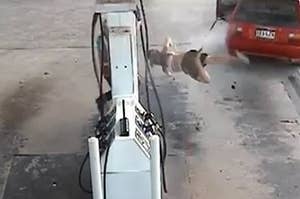 A driver panics and attempts to drive away while his girlfriend is pumping gas, with comically inept results. 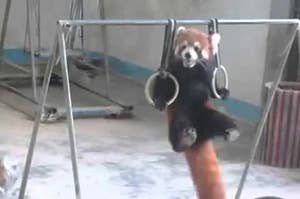 A red panda from Panda World reserve in Fuzhou, China, is an expert gymnast. Watch her do pull-ups (aka muscle ups) on gymnastic rings like it's no big deal 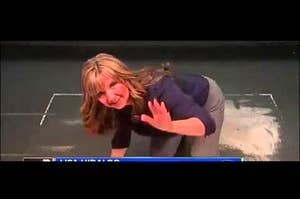 Filming the Weather can be mundane especially because these people are wrong half the damn time but it is when something out of the ordinary happens that makes watching the news worth our time. Lisa Hidalgo is a weather girl for Denver ABC 7 -- The Denver Channel. Lisa was predicting the news when even the camera became so bored, it fell asleep. Lisa Hidalgo quickly jumped into a dance and dropped down on her knees and delivered the rest of the forecast. Watch this Weather girl go crazy when the TV camera inside the studio falls down. 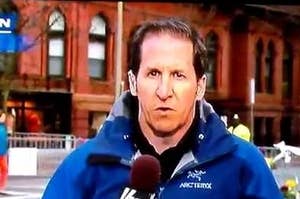 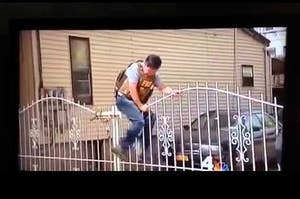 Even heroes have embarrassing moments now and again. 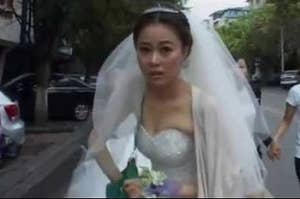 Dedicated reporter Chen Ying didn't let her wedding day get in the way of reporting on China's devastating earthquake, springing into action without changing out of her wedding dress. 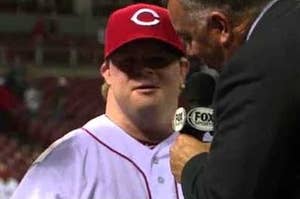 Cincinnati Reds third baseman Todd Frazier calls Teddy Kremer a good-luck charm. And with good reason: "Every time he's here we score 10, 11, 12 runs." The 30-year-old batboy, who has Down Syndrome, recently told Frazier, "You're my best friend, I hope you hit a home run for me." And Frazier had no reservation in saying he'd get it done. The greeting that awaited Frazier after belting a 421-foot shot against the Miami Marlins might have made it Frazier's happiest homer ever. "I started smiling even before I hit home plate," he said. Kremer was so excited the umpire had to holler at him to fetch Frazier's bat, but that didn't dampen his spirit: "I'm so proud of Todd." 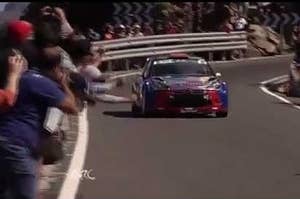 Former F1 driver Robert Kubica has had a lucky escape, after crashing through safety barriers p... Kubica had been leading the rally in the Canary Islands when he lost control of his Citroen and ploughed into the barrier. Luckily, the barrier managed to stop the car plunging over the cliff, but the damage to Kubica's car was substantial. It was Kubica's second serious rallying accident. He was seriously injured in the first one, which ended his five year Formula 1 career. Talking in the aftermath of the crash, the Pole said the accident had surprised him. "We were not pushing really hard, I mean I just misjudged how deep downhill it was. "Unfortunately, it is not an excuse. When we were high in speed I was lacking the rear grip, especially when we were downhill and I should have taken account of this, but unfortunately I didn't." 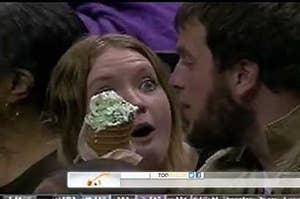 This guy did not feel like sharing his ice cream cone when he was caught on the "fan-cam" at an Orlando Magic vs. Indiana Pacers basketball game earlier this week. Announcers spotted him denying his girlfriend a shot at the creamy delight and had a little fun with him in the play-by-play. 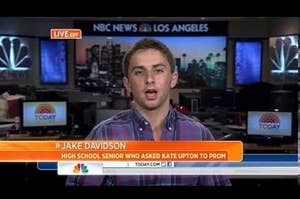 Kate Upton Surprises Teen Who Asked Her To Prom

Jake Davidson, 17, talks about the creative YouTube video he made to ask Sports Illustrated model Kate Upton to his high school prom, and gets the surprise of his life when Upton herself joins the conversation.